Startseite » English » Miracle cure turmeric? The story behind #turmericwithmyra & how I prepare my golden milk! 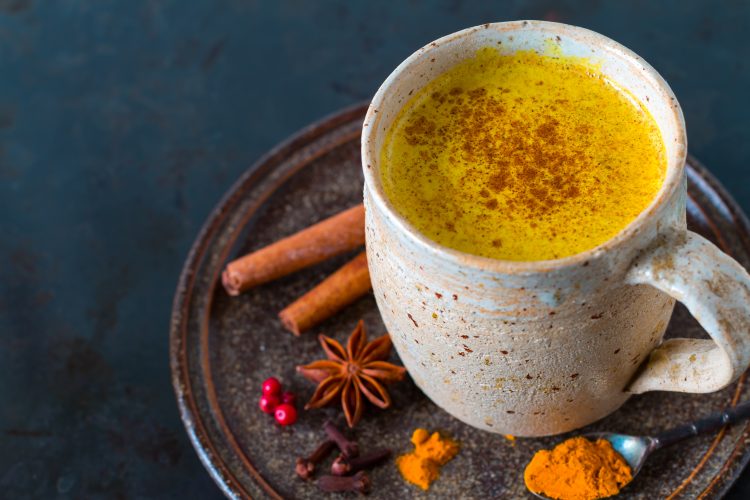 For over two years now, I am drinking turmeric with orange juice  every morning on an empty stomach. And I don`t do it primarily, because it tastes so super good – no, but because I was suffering  of the chronic disease ulcerative colitis for several years, and the “golden milk” was so far the only thing who really helped me getting the symptoms and pain “under control”. And  by „under control“ I mean – I have no bleeding, mucus, diarrhea or cramps anymore. To understand the importance of this routine with my „Golden Milk“ let`s tur back the time :

6 years ago I had blood in my stool after an allergic reaction to antibiotics. Unfortunately, this was the beginning of a hospital and doctors odyssey. I have been given all sorts of conventional medical medication, unfortunately always unsuccessful and my syptoms got  even worse often in addition to violent reactions of my body. For example I had an anaphylactic shock in which my lip and tongue grew so big that I threatened to choke. This was followed by cortisone therapy.By the way, shortly before this phase, the first lipedema symptoms broke out, to what extent both stories could possibly be related, I will explain in another part of the blog.

In this post, it’s only about the intestine – so how did it continue?

After about 7 intestinal and gastroscopy, which always seemed to make things worse by the mechanical irritation, I decided not to take anymore medication . Instead, and for that I am very grateful to her, my mother has dealt with possible remedies from nature. So it came that I first took Manuka Propolis capsules, which helped me a lot in the first place. (I like to report on this once in more detail in another blog report) Unfortunately, the effect has diminished in the long run, and I have to admit it was then too expensive for me.Finally, we stumbled upon the „miracle spice turmeric“. After reading a lot of positive things, my mother brought me a 1 Kilogramm bag of turmeric from the “Achterhof” . I remember it was the day of her first lipedema surgery. She held it under my nose and said, so drink it now: I was thrilled, as you can imagine … NOT! : D  During the years before I had had to strangle off so much weird stuff, I did not feel like it. BUT – I did it, and I did it right away – and that was probably the best decision of my life, because after only one week of taking it, I did not have any complaints anymore. And you can believe me when I say that the turmeric has arrived where it should arrive …;)

The only thing that still wanted to be perfected was the taste. This could be solved quickly, because instead of water or nut milk, I recommend you to take orange juice or passion fruit juice with 100% fruit juice content:

1. Vitamin C boosts the effects of Curcumin and

2. In my opinion, the juice suits best to avoid the strong taste of the Turmeric

So what is turmeric?

Turmeric belongs to the plant species of the ginger family. Even if we usually only see it as a yellow powder in the spice rack of our supermarkets, it is originally a Ingwer similar looking tuber, whose pulp is colored yellow. This yellow coloration is caused by the tuber „curcumin“ – and this fabric is exactly what we want, because it is the dream of our sleepless nights, with the special magical effect: D Joking aside: Curcumin actually has one especially anti-inflammatory effect and is therefore used in many areas. I’ll list the features and uses below:

Since many of you alread participate in the challenged I launched on Instagram: #turmericwith myra (german: #kurkummitmyra)  I already also received some great feedback from you, which I like to summarize here:

✅ Improvement of digestion, no more constipation or no diarrhea, no bloated stomach

✅Improvement of the skin

Recipe and intake for my golden milk

Attention: This is just MY preparation for the Golden Milk – of course you can also prepare it with water or vegetable milk. I would just advise to not take animal milk, as it is suspected of causing inflammation in the body or intestine, and therefore may be responsible for many diseases. That would be exactly the opposite of what we actually want to achieve.

I realy recommend you to drink every morning on an empty stomach so that the turmeric can perfectly sit on the mucous membranes. Then you can have breakfast as usual of course. An overdose is not possible, but it may be that  exacerbation effect occurs. In that case I would recommend to try it for at least a week.

What should you pay attention to?

Since turmeric has, similar to garlic by the way, a blood-thinning effect, you should take a two-week break before a surgery.Before you take the turmeric, you should make clear to yourself that this is not a pleasure challenge, but you do something for YOU, so be aware that it takes some time for it to take effect (for me It took a week) So do not give up directly, after the first day.Be clear about what you take the turmeric for – because only then you can „measure“ if it helps you

Do not worry, even in this case there is a solution: Simply fill your turmeric capsules yourself! Y can just order so-called „empty capsules“, and  fill them at home with turmeric and black pepper. I use these capsules: https://amzn.to/2Pvvqxd* I strongly recommend gloves because the turmeric powder is really strong and yellow

Incidentally, the capsules are also the saviors for me when I travel and nor able to mix my „golden milk“. I`d  just take 5-7 capsules in the morning on an empty stomach then.

I hope you enjoyed this post, I am happy about anyone who tries it and who benefits as much as me! On Instagram you will find many more people under the #Kurkumamitmyra  (english: #turemericwithmyra) and experience: https://www.instagram.com/explore/tags/kurkumamitmyra/?hl=de

*All links marked with a star (*) are affiliate links and support me with a small comission.

We use cookies on our website to give you the most relevant experience by remembering your preferences and repeat visits. By clicking “Accept All”, you consent to the use of ALL the cookies. However, you may visit "Cookie Settings" to provide a controlled consent.
Cookie SettingsAccept All
Manage consent

This website uses cookies to improve your experience while you navigate through the website. Out of these, the cookies that are categorized as necessary are stored on your browser as they are essential for the working of basic functionalities of the website. We also use third-party cookies that help us analyze and understand how you use this website. These cookies will be stored in your browser only with your consent. You also have the option to opt-out of these cookies. But opting out of some of these cookies may affect your browsing experience.
Necessary immer aktiv
Necessary cookies are absolutely essential for the website to function properly. These cookies ensure basic functionalities and security features of the website, anonymously.
Functional
Functional cookies help to perform certain functionalities like sharing the content of the website on social media platforms, collect feedbacks, and other third-party features.
Performance
Performance cookies are used to understand and analyze the key performance indexes of the website which helps in delivering a better user experience for the visitors.
Analytics
Analytical cookies are used to understand how visitors interact with the website. These cookies help provide information on metrics the number of visitors, bounce rate, traffic source, etc.
Advertisement
Advertisement cookies are used to provide visitors with relevant ads and marketing campaigns. These cookies track visitors across websites and collect information to provide customized ads.
Others
Other uncategorized cookies are those that are being analyzed and have not been classified into a category as yet.
SPEICHERN & AKZEPTIEREN